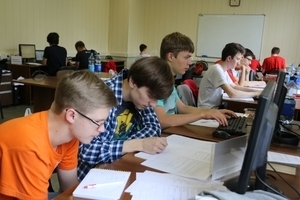 23 August 2017
The international summer programming camp is well under way.

The international summer programming camp is well under way.

Over one hundred young programmers from eight countries solve problems at the premises of the Flagship University of Karelia. Every day they spend hours working on the problems, and altogether they will solve over one hundred problems in the course of the camp.

“As a rule, the winner of the camp solves the most problems, leaving only 4-5 problems unsolved. This time the contests are challenging, but it is not a problem for the programmers who come to PetrSU. The most competitive and goal-oriented programmers come here to show their best performance,” noted the co-chairman of the jury Oleg Khristenko.

Every evening after the contests, the participants gather for problem analysis, after which they can finish their solution, although it will not be counted in the ranking. Let the best team win!