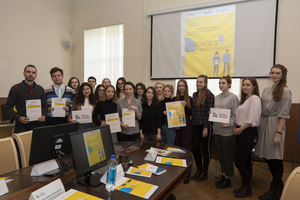 17 April 2019
Saint Petersburg State University of Economics with the support of the Swedish Institute and the Consulate General of Sweden hosted the second Northwestern interuniversity students conference Sveriges regionvetenskap (Regional Studies of Sweden) dedicated to the culture, literature, and language of the country.

Saint Petersburg State University of Economics with the support of the Swedish Institute and the Consulate General of Sweden hosted the second Northwestern interuniversity students conference Sveriges regionvetenskap (Regional Studies of Sweden) dedicated to the culture, literature, and language of the country.

The conference was organized by the senior teacher of the Department of Roman and German Philology of Saint Petersburg State University of Economics Maria Yatsenko.

Among the guests of the conference were the representatives of the Consulate General of Sweden: Consul General Eva Sundquist and coordinator for culture and media Natalia Bratova. The Consul in her welcoming word expressed her pride in the fact that Russia has so many students interested in the Swedish language and culture.

PetrSU students Alina Igolnitsina, Diana Larshina, Olga Skorokhod, and Liubov Koposova presented at the conference reports in which they told about their research on Swedish culture and language. The proceedings of the conference will be published as Sveriges regionvetenskap in the Swedish language.

Participation in such a conference is an opportunity to present your work to the academic community and master your proficiency in the language, as well as establish new contacts among people who share your interests.

After the official part of the conference, the participants were invited to the Consulate to see film Sami Blood in the Swedish language. The viewing included traditional Swedish coffee break, called Fika in Swedish.

The students shared their impressions of the event.

“The participation in the Saint Petersburg conference was a rewarding experience, we have learned a lot about Sweden both when we listened to the reports and when we prepared our own. As the conference was held in the Swedish language, it was also a great language practice.”

“I was nervous as it was my first public performance in a foreign language. I gained valuable experience. Besides that, it is always great to be among people with similar interests. Another benefit of the visit was meeting the students with whom we made acquaintance at the summer courses in Sweden.”

“The conference provided us with a rare opportunity to share the experience with other students who study the Swedish language. Many participants presented reports that broadened my knowledge of Sweden and provided reassurance that I have chosen an interesting language to study. The road has worn us down. My only regret is that such an event was not held in PetrSU.”