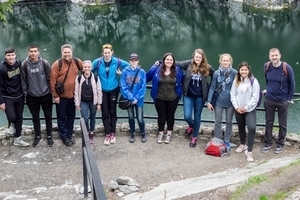 The Institute of Foreign Languages hosts the International Russian Language and Culture Camp.

At what age Russian children start school, how one becomes a university student, geography and history of Karelia – these are just some of the topics covered by the American students.

Alongside university professors, the American students met with a guest Gennady Saraev, children rights’ ombudsman in the Republic of Karelia. He reported on the situation in this area in Karelia.

In the National Library, the students got acquainted with the collection of rare books, including English editions, listened to kantele, learned about Karelian and Finnish epos Kalevala, which is available in different languages of the world.

The Russian and American students took great interest in Q&A meeting at which they discussed a wide range of questions. The meeting in the conversation club in the Russian language nicely complemented daily Russian language classes. Contests, quizzes, and entertaining tasks enlivened the diligent study of the language.

The young people particularly enjoyed the trip to the Ruskeala Mountain Park where they walked along rocky slopes and got an energy boost.

The Camp will continue until June 9.