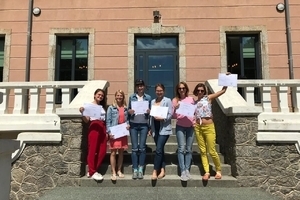 The training was organized by the Embassy of France in Russia by the results of the Teachers of the Future 2019 (Enseignants de demain) contest.

Nine future teachers from all over Russia, among whom were PetrSU students, mastered their French language skills, studied methods of teaching French as a foreign language, shared their teaching practices.

“During our study, we took classes as well as actively immersed ourselves in French culture. Thus, a small town of Quimper held the annual festival of traditional costumes and music (Le Festival de Cornouaille de Quimper). We took a tour around the picturesque narrow streets of the town. On the main square we saw local citizens parading in Breton costumes with bagpipe orchestra. All this only added to the “magical” atmosphere. I am happy that we had an opportunity to visit yet another part of France, meet new people from different countries and experience local everyday life,” shared her impressions Anna Zhestkova.

The students added that their participation in the Teachers of the Future 2019 contest and the grant to study in France have been made possible through the team efforts:

“We thank our teachers Nadezhda Barymova and Olga Veselovskaya for their help in selecting materials for the contest, as well PetrSU Student Union and the Oxford Russia Fund for the financial support.