PetrSU Celebrated the Anniversary of Cooperation with Tubingen 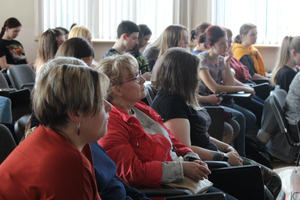 20 September 2019
The Assembly Hall of the Institute of Foreign Languages of PetrSU hosted the presentation “Petrozavodsk-Tubingen: 30 Years of Cooperation”.

The Assembly Hall of the Institute of Foreign Languages of PetrSU hosted the presentation “Petrozavodsk-Tubingen: 30 Years of Cooperation”.

Lilia Kunstle, the Chairperson of the Society” was the speaker of the event.

“I want to tell you about a true friendship between people,” was how she started her speech.

Lilia Kunstle told about the history of the organization, the members of which had established the cooperation between Tubingen and Petrozavodsk. She reminded that the agreement on friendship was signed back in 1989, and now the intercity cooperation is supported by the West-East Society.

The West-East Society enabled introduction and friendship between citizens and cultural workers. The organization has participated in the events of cultural and informational ships, academic exchanges, amateur radio communication between the cities.

At the presentation Lilia Kunstle covered the timeline of the cooperation between the cities:

“The society strived to dispel negative stereotypes and serve the cause of peace!”

She highlighted the importance of preserving the warm relations between Petrozavodsk and Tubingen today.

The Institute of Foreign Languages has prepared a gallery of the twin-cities of Petrozavodsk and a quiz on the cooperation with the German city.